In the heart of Thal exists a bustling little town with a few thousand inhabitants, called Mankera. It is now a tehsil headquarter in Bakhar district, situated on Bakhar- Jhang road, 50 k.ms south east of district headquarter. It is strategically situated in the middle of Great Thal. Its pride landmark is the old fort, which faced attacks of many invaders from Alexander to Ranjeet Singh.Mankera looks no different from any other small town scattered throughout the country, but it holds in its bosom a history that has spanned across centuries. Its glorious past belittles its present status. 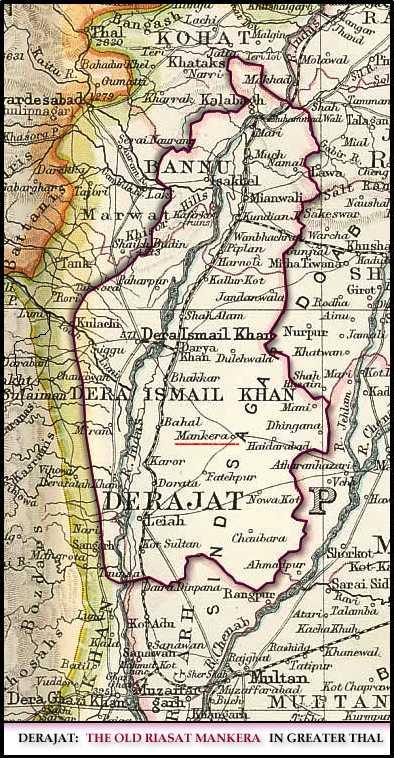 Traditions suggest that it existed since 1000 B.C It was founded by Raja Malker, and was named Malkherkot. Alexander conquered this fort with many difficulties. During the conquest of Great Sindh by Mohammad Bin Qasim, his general Asswad Bin Zuhair, after the conquest of Shor Kot captured Mankera. He appointed Abul Khuzaima governor of this area, who died in Mankera and is buried here.Jalal-ud-Din Khwarzam Shah defeated by Changez Khan, crossed Indus at Nilab and afterwards captured Sindh Sagar Doaab.Here most probably he made his stronghold, recruited army and attacked Uchch. In Persian manuscripts Thal is named Chol-Jalali, which means he stayed here for aconsiderable period.After the downfall of Arab rule in Sindh, the Hindu Raja of Kanoj took possession of Mankera followed by the Balheems and Makens. Makens ruled Mankera for five hundred years. During the time of Ghias-ud-din Balban, they were converted to Islam by Baba Farid Ganj Shakar.

Towards the end of the fifteenth century, the Baloch from Makran flocked into the Thal in and around Mankera, and subsequently ruled this state for the next three hundred years. During the period of Baloch ruler Baloch Khan {the blind} Jhanda Singh of Bhangian wali Misl attacked and devastated the area and was soon ousted. Abdul Nabi Kalhora with help of Afghan king took over it from last Baloch ruler Mohammad Khan Jiskani in 1789 A.D., however he declared himself indepndet ruler of Sindh Sagar. The Abdali kings annexed Mankera, ousted Kalhora and appointed Mohammed Khan alias Sarbuland Khan governor of Mankera in 1793 A.D. During the Pathan rule the state of Mankera stretched from Suleman Range to Jehlam River and from Eisakheil to Kot Addu and Chaubara. Nawab Sarbuland Khan died in 1810 A.D.,and was buried here and his son in law Hafiz Ahmad Khan took over as governor of the state. The Afghan rule ended with the famous siege of Mankera by Ranjeet Singh in 1921 A.D. which resulted in the forfeiture of Hafiz Ahmad KhansÃ¢â¬â ¢ claim to Mankera and his retreat to Dera Ismail Khan. During the Sikh period Mankera was ruled by Dewan Sawan Mal and Mooraj of Multan.

After the British takeover in 1849 A.D. the Mankera state was given status of Derajat Division in Punjab which it held till the N.W.F.P. was formed in 1901 A.D. Mankera fort, the principal feature of the town lies a hundred metres to the left of the Bhakkar highway. The fort was constructed in two phases. The initial construction of the brick fort was carried out during the time of the Baloch rule, and further fortification in the form of a thick mud wall was undertaken during the Pathan rule. Today the fort and its fortification are mostly in ruins. Mankera's historical sites have never been considered worthy of any official recognition. The major part of the mud wall still exists, however decay and neglect is abundantly clear. The main fort is mostly in ruins except for a well, a tomb, and a few signs of masonry. The outer walls of the citadel are however intact. The Sikh occupation of Mankera is abundantly evident. Next to the Jamia Masjid of Mankera are the ruins of a Jain templeÃ (Mander Shri Mahaveer Jee Maharaj) built during the Sikh rule, and even the tomb of Nawab Sarbuland Khan, just outside the main citadel has a Hindu aura about its construction. The Sikh annexation of this area began in 1821 A.D. and was completed with the fall of Mankera in the autumn of that year. Ranjeet Singh personally led the troops that besieged Mankera. The siege lasted for twenty-two days and at a great cost to the invaders. Mankera, fortified by the brick wall had a distinct advantage of its position being in the middle of a desert. The besieging army had not only to deal with the gallant musketry of the Mankera troops but had to find out ways to deal with the natural difficulties as well. Water had to be carried for the troops from considerable distances. Ranjeet Singh's ingenuity saved the day, as he ordered his army to dig several kacha wells. Twelve such wells were dug.

The siege dragged on for twenty-two days during which time the Nawab held his own; however the desertions of his sardars and the demolition of one of a minaret of Jamia Masjid — taken as a bad omen — forced the Nawab to surrender the fort to the Sikhs. The iron ball shot from the big guns, including the Zam Zama employed by Ranjeet Singh during the Mankera expedition is still preserved in the mosque's compound. Following the surrender, the Muslim population of Mankera was expelled and replaced by Sikhs and Hindus, and the area was put under the direct control of the Lahore Empire. The Sikh rule of Mankera ended in 1847 and for the next one hundred and forty years Mankera existed as a non-entity.

Mankera's other claim to fame is the incident, which took place in 1794 when Prince Hummayun, son of Taimur Shah, the Abdali King and a claimant to the throne of Kabul made a vain attempt to overthrow his brother, Zaman Shah. His brother comprehensively defeated him and Hummayun fled to Thal Sagar. The Saddo Zai Nawab of Mankera, Nawab Mohammad Khan apprehended him at a well near Layyah. Hummayun's son was killed in the scuffle that followed his arrest, and at the behest of Zaman Shah, Nawab had Hummayun's eyes put out. Hummayun spent the rest of his life imprisoned in Mankera fort. A tomb in the middle of the fort is believed to be that of Prince Hummayun, and is considered a minor saint by the locals. On the other hand, the Nawab received the title of Sarbuland Khan and the territory of Dera Ismail Khan from the King.